Get your own
Personal Daily Horoscope
Join For Free Here

Sagittarius - from the Box of Stars 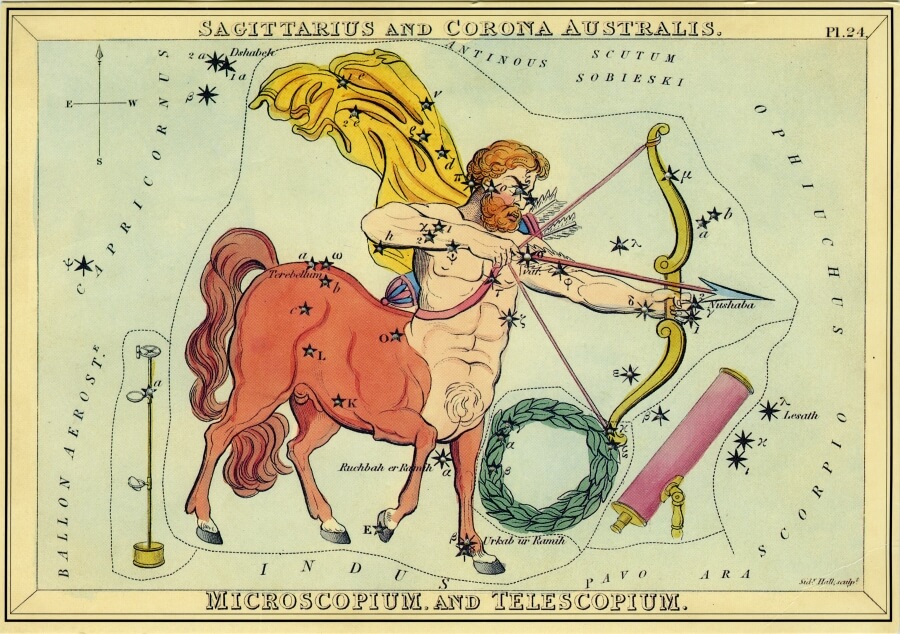 Sagittarius, the starry centaur, who points his arrow at the centre of our galaxy, can be seen low on the southern horizon, next to Scorpio, in the northern summer.

The Sun in Sagittarius

With the Sun in fiery Sagittarius, the most adventurous of all the signs, you see life as a great journey and a quest to find the truth. Like the starry archer, who aims his arrow at the heavens, you are not content with dull routine and nothing less than finding out life's meaning really satisfies you. You paint on a broad canvas and you soon grow restless if you are pinned down or penned in for long. To learn, and then to teach, are your two goals, and sharing your ideas with others, and trying to build a better world, are of great importance to you. Politics, philosophy, religion and long-distance travel are Sagittarius' domain.

Coming after Scorpio, the sign of death and regeneration, Sagittarius represents the eternal spirit, and those born under him can draw on the energy and wisdom of nature and the instincts embodied in their centaur side to aim their arrow at the stars.

Sagittarius is the last of the fire signs and is ruled by Jupiter, the luckiest planet in the sky.

The Myths and Legends of Sagittarius

The heavenly Archer, Sagittarius, stands with his bow drawn back, his arrow pointing at Antares, the great red star which marks the Scorpion's heart.

The famous horsemen of Thessaly in Greece, who, perhaps, were the first cowboys, rounding up their cattle on the plains, are thought to have been the origin of the mythical centaurs. Greek legend, however, gives them a different start. There, they are the offspring of a cloud which took the form of Hera, the queen of heaven, and of Ixion, who was banished to the underworld by Zeus to spin for ever on a burning wheel for boasting that he could win Hera's love.

With the exception of Chiron, who was wise and good and taught several of the Greek heroes the mysteries of life, (see The Wise Centaur in the Lost Zodiac), they were a savage, cruel and drunken lot, who drew the chariot of Bacchus, the orgiastic god of wine, and were bent on rape and pillage.

The centaurs' real origin, however, is thought by some to lie much further back in the Gandharvas, the celestial horsemen of ancient India. Corona Australis , the centaur's wreath at Sagittarius' feet, which was often portrayed as a crown, is a memory of the golden sun rays which emanated from the horses' heads.

Sagittarius also formed part of the original Babylonian zodiac, where he was their archer god of war, pointing his arrow at the centre of our galaxy.

The ruling planet of your personal chart is the one that rules your Rising Sign.

However, if Sagittarius is your Sun Sign, its ruler, Jupiter, will also play an important role in your psychology.

The largest planet in the solar system belongs to Jupiter, or Zeus, the King of Heaven, sitting four-square on his throne on the cloud-capped heights of Mount Olympus. Expansion, optimism, growth and the life of the spirit belong in his realm.

The planet Jupiter has also been called the Path and the Way and governs our life direction. It brings a happy disposition and good luck.

Optimistic Jupiter's position in your chart shows where, and how, you can grow and expand your horizons. Jupiter rules your philosophy of life - how you make sense of existence. It is the Teacher and Guide, representing wisdom and your ability to grasp life's meaning. Its sign and house position, as well as the links it makes to other planets in your chart, describe your life path and career. It is also the bringer of good fortune, but, because it expands everything it touches, it can also bring inflation and exaggeration. It rules long distance travel and discovery of every kind.

The centre of our galaxy is in Sagittarius on the shoulder of the Large Sagittarius Star Cloud near the border of Scorpio. This is one of the areas of the heavens most densely populated with nebulae and stars, which can be seen with the naked eye. It is now thought that at the heart of the galaxy there may be an enormous black hole, probably as heavy as a thousand suns. 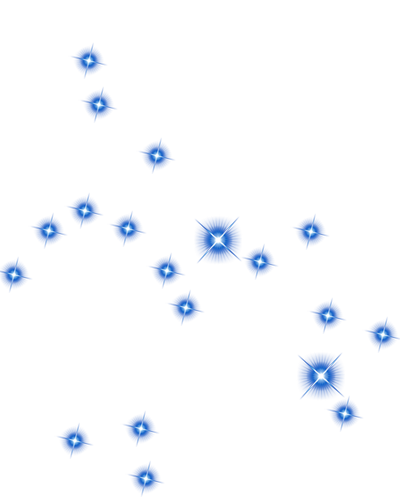 The Starry Archer's Arrow and the Centre of our Galaxy

Since Babylonian times, the star that marks the tip of Sagittarius' arrow has pointed towards the centre of our galaxy.